A unique historic event took place on Sunday 21st of September 2014, when the only two airworthy Lancaster bombers in the world flew together over Derwent Dam in the Peak District. Thousands of people turned out to see the Battle of Britain Memorial Flight’s “Thumper III” and the Canadian Warplane Heritage Museum’s “Vera” fly together over the dams where 617 Squadron practised 71 years earlier for the famous Dambusters raid.

This is a composite image from the day showing both Lancasters. It is available (without the watermark, of course) as a borderless 16″x12″ print which has been printed on Fuji Crystal Archive Paper (guaranteed against fading).

Prints cost £40.00 each (including postage within the UK).

Contact me to order a copy, or if you have any further questions. 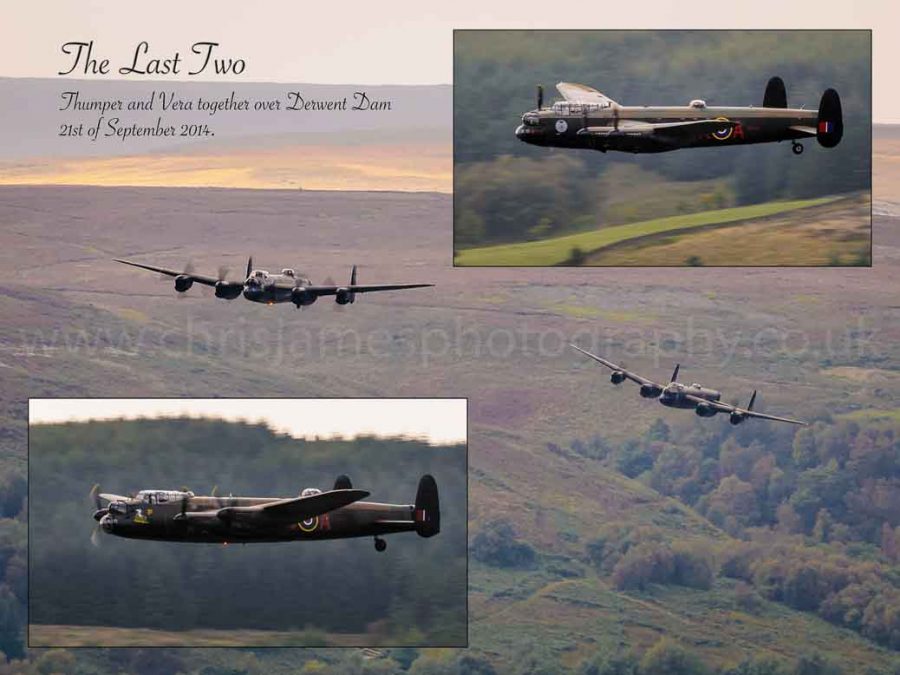 This was the last event featuring the two Lancasters before the 70 year old “Vera” flew back across the Atlantic to Canada, after a two month visit to Britain. It was a particularly fitting end to Vera’s tour, as 29 Canadians took part in the Dambusters raid – of whom 13 were killed and one taken prisoner.

The day’s flying started with two passes down the valley by a Spitfire and Hurricane of the Battle of Britain Memorial Flight, followed by a RAF Puma helicopter passing low over the dam wall. Half an hour later the two Lancasters appeared, flying in formation, and the Derwent valley filled with the unforgettable throb of eight Merlin engines. After the first pass down the valley, the two bombers turned and made a second pass in the opposite direction – flying higher this time. They flew up Derwent and then Howden Reservoir before returning to make their final pass – this time a little lower. Those of us near the top of the valley side were almost level with the planes as they passed – giving us possibly the best views of the day. If you looked carefully, you could just see someone wearing luminous green ear muffs in “Vera’s” mid upper gun turret (very 1940s!). This turned out to be Sydney Marshall, who was a flight engineer on Lancasters in World War Two, and who was being given an unforgettable trip at the grand age of 90!

Here is a slideshow of some images from the day (click to start):